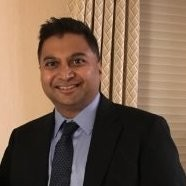 Dr. Shah is a Diagnostic Radiologist who received his medical degree from SUNY HSC at Brooklyn in 1995, after which he completed a residency in Diagnostic Radiology at Winthrop-University Hospital (now NYU Winthrop hospital) and a fellowship in Abdominal Imaging at New York Presbyterian Hospital.
He has worked as a radiologist for the past two decades throughout Long Island, and was an attending at North Shore University and NYU Winthrop hospital before recently joining the radiology department of Good Samaritan Hospital. In addition to practicing radiology has played a very active role in teaching and mentoring medical students and radiology residents, including serving as a radiology clerkship director for the SUNY Stony Brook School of Medicine. He is the current Vice President of the Long Island Radiological Society, and has been involved with radiology research which has been published in national journals. He lives with his family in Jericho, and in his spare time is an avid photographer and also enjoys playing tennis.