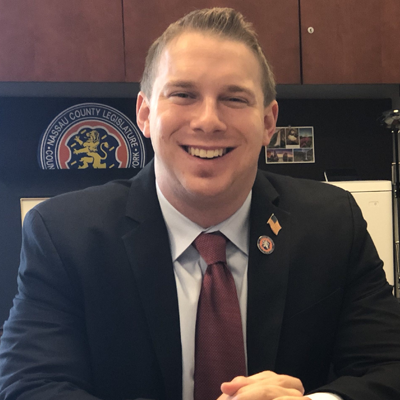 Legislator Josh Lafazan, at 23 years of age, became Nassau County’s youngest-ever legislator upon his election to the Nassau County Legislature in November of 2017. He is currently serving his first term, where he represents Nassau’s 18th Legislative District.

Josh graduated from the Harvard Graduate School of Education with a Master’s Degree in Education Policy and Management in May 2017, and from the Cornell University ILR School with a Bachelor’s Degree in Industrial and Labor Relations in May 2016.

Previously, in May 2012, at the age of 18, Josh became one of the youngest elected officials in the history of New York State when he was elected to the Syosset School Board of Education. Josh was elected with 82% of the vote one month before he graduated from Syosset High School, and was re-elected by his constituents in 2015. During his time on the school board, Josh successfully fought for an unprecedented increase in transparency and openness of all school district functions.

Josh’s dedication to community service began before he ran for the school board. In 2011, Josh became the Founder & CEO of Safe Ride Syosset, a community outreach program dedicated to ensuring that no Syosset teenager gets behind the wheel of a car while intoxicated, or is the passenger in a car with a drunk driver. Josh and his volunteers safely drove home over 350 students in 2012, and there was not a single teenage drinking and driving accident in Syosset on the nights Safe Ride was operating.

Josh has made fighting the heroin and opioid epidemic his top legislative priority. Since 2013, Josh has served on both the Board of Directors of the Long Island Council on Alcoholism and Drug Dependence (LICADD), in addition to the Nassau County Heroin Prevention Task Force, where he was appointed by the office of Nassau County District Attorney Kathleen Rice.

In 2012, Josh was named to the Long Island Press’ Power List of the 50 Most Influential People on Long Island. In 2014, he received the Academy of Education Arts and Sciences Educators’ Voice Award for School Board Member of the Year. In 2016, Josh was named a recipient of the New York State School Boards Association Lifetime Achievement Award.

Josh is also the author of “Political Gladiators: How Millennials Can Navigate the 21st Century Political Minefield and WIN!”